Fernando Sandate, 75, passed away December 21st at Hemet Global Medical Center
Fernando was born September 2, 1945 in Yuma,Arizona to Ramon and Refugia Sandate , 1 of 10 children
Raised in Yuma, Az and attended Yuma high where he played football, baseball and basketball and excelled in all 3 sports
He married Mary Ann Burgoz in 1966 and moved to Lynwood, CA where they had and raised 2 children and later divorced after 13 years.
He coached his son in baseball and football in the Lynwood park and recreation for years.
Fernando was employed at GE Shell core in Cudahy, CA where he worked for 25 years
Moved out to Aguanga, Ca in 1992 and enjoyed living in the country, coached youth baseball and adult co-Ed softball
He is known by many as “Coach”
He was very quick witted, generous, funny, caring and an all around great man
He loved , cherished and protected his family to the fullest
He would give you the shirt off his back or his last dollar if he thought you needed it
He dealt with a lot of medical issues but always had a great attitude and a love of life
His last 10 years were spent on The ranch, owned by Gloria and Behrouz Hekmatnia (his bffs)
Working and supervising the day to day up keep and taking great pride in the outcome of his hard work and sitting back, relaxing and taking it all in
He also enjoyed watching his favorite teams Dodgers, Raiders, Lakers and UCLA, he always had a love for sports
And his all time favorite was gambling ( slot machines and poker)at the local casinos and especially his many trips to Laughlin, NV
He is preceded in death by his parents Ramon and Refugia Sandate, 3 brothers David Sandate, Chris Sandate and Angel Sandate
And 2 sisters Amelia Ramirez and Jessie Soliz
He is survived by his son Fernando Sandate Jr, his daughter Michelle Venegas , son in law James Venegas all of Aguanga, CA and his stepson Robert(Audra) Gooden and Brooklyn and Kinsley of Yucca Valley, CA
Sister Hortensia and brother in law Gilbert Ochoa of Hacienda Heights, CA, sister Estella Gill of Yuma, AZ, sister Helen Camino of Baldwin park, CA and Brother Rudolfo and sister in law Angie Sandate of Yuma, Arizona and many cousins, nieces, nephews and friends that will forever remember, love and miss him dearly

Celebration of life at a later date 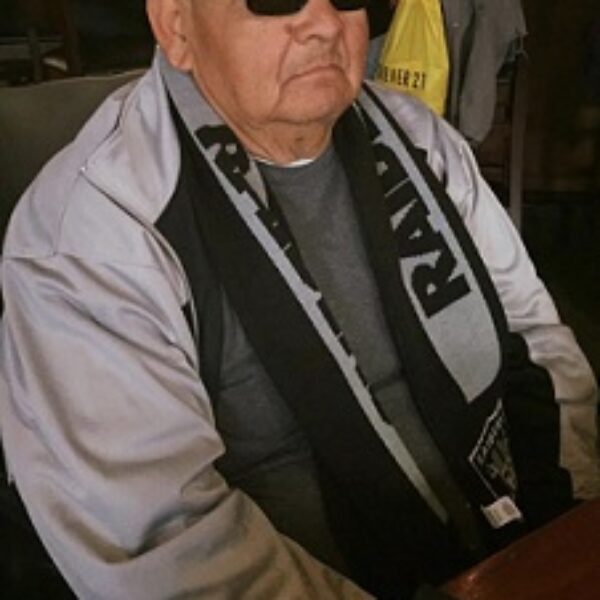